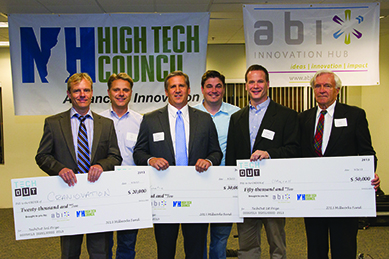 Green insulation proved itself to be the startup darling at the 2013 TechOut competition held on September 26 in Nashua, NH.  UltraCell, located in Manchester, collected the first place prize money, with Kinetic Surface Control and CranioVation claiming second and third respectively.  TechOut is New Hampshire’s largest startup competition, providing half a million dollars in financing over five years to entrepreneurs with the most viable plans to develop and market new technology products or solutions.

Six finalist companies were competing for $100,000 in prize money and made four-minute presentations to the live audience during the TechOut event.  A panel of judges awarded the top two prizes with third prize, $20,000, chosen by the audience at the event.

The NH High Tech Council and the abi Innovation Hub came together to present this year’s TechOut. The competition is open to companies that have been in business for fewer than three years, raised less than $250,000 in funding and have less than $250,000 in revenue. The competition awards $100,000 in prize money: first place receives $50,000, second place $30,000 and third place $20,000.

UltraCell Insulation has a patented means of producing cellulose insulation from recycled cardboard, allowing the utilization of corrugated cardboard as a feedstock, a widely available, clean and growing recycled resource, which is not economically viable to utilize by other means.  The resulting product is free of inclusions, has a more uniform color, and can be produced at a lower cost.  In addition, the green attributes of providing substantial carbon savings with locally-produced recycled materials make UltraCell’s product even more attractive.  Jonathan M. Strimling, president and CEO, said, “I want to thank the High Tech Council and the abi for putting this together.  We’re very honored to win this award.  I was very, very impressed watching the other presenters thinking ‘Wow, they’re really good.’ So we really appreciate this.  We really do need help to move us forward and this money is going make a huge difference in our ability to do it.”

Kinetic Surface Control, Inc., based in Newmarket, NH, is a services company focusing on corrosion removal and surface preparation for industrial and military markets.  Kinetic is developing an innovative and proprietary Drop Blast™ resurfacing technology.  Drop Blast will be used to strip paint, corrosion or other surface coatings from metal, concrete or asphalt surfaces and prepare these surfaces for repainting, recoating or resurfacing.  Drop Blast is the only 100% water-based system capable of quickly cleaning and profiling various substrates in a single step.  Said company CEO Steve Graves, “We really appreciate this opportunity.  This money is going to let us keep the momentum going. We’ve got an $800,000 grant pending with the Navy and we’re hoping for good news on that in January and this will help us get there.”

CranioVation, of Concord, NH, is developing an aneurysm clip that is made entirely of biocompatible plastic that will not interfere with any imaging modality.  The clip will be used in the same manner as existing clips—to stop bleeding.  However, it will preserve the doctor’s ability to take a clear image of the brain.  Of their third place award, CranioVation co-founder Craig Litherland said, “We were happy that the judges chose us to go to the finals and fortunately we were able to win the audience choice prize.  We will use this funding to build and test prototypes in order to show that the design meets the performance requirements.”