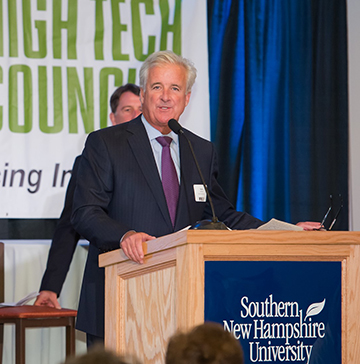 Patrick Sullivan, president and cofounder of Game Creek Video, a mobile high-def sporting event video and television production company based in Hudson, was named 2016 Entrepreneur of the Year at the NH High Tech Council’s annual celebration on June 7. Sullivan pivoted a career in sports team management into an innovative and Emmy Award-winnng business that produces major sporting events for networks and organizations across the globe.

“We have been lucky to work with some of the most brilliant and passionate people who have made our company what it is today,” Sullivan said as he accepted the award at the celebration held June 7. “One of the truly great strokes in my life was the decision to move my business to New Hampshire…I can only hope that the entrepreneurs that follow us will have the same exposure to these great resources, and that the great state of New Hampshire continues to invest in and recognize the value of human capital that is nourished and thrives here.”

The Council has recognized individuals who make invaluable contributions to the Granite State’s technology and business community for the last 28 years through the EOY program.

“The recurring theme that we keep hearing when we talk to entrepreneurs – from all phases of the business lifecycle – is that the support and resources available in New Hampshire are second to none,” said Matt Cookson, the Council’s executive director. “We are honored to play a small part of that and congratulate Patrick Sullivan and his team at Game Creek Video for setting a compelling example for others working hard to make our entrepreneurial ecosystem the envy of the country.”

Sullivan launched Game Creek Video in 1993 with a degree from Boston College, two mobile television production trucks, six employees and the knowledge that comes with growing up in major league football. A former ball boy, stadium manager and New England Patriots’ general manager for seven years, he is now president of the industry’s leading mobile high definition TV production-services company. Among his many technological accomplishments, he helped launch the world’s first large scale IP based routing system in a remote production facility in 2015. This remote production facility was the primary home for the 2015 US Open golf tournament television coverage for FOX. Together, Game Creek Video and its team has received more than a dozen Emmys and Emmy nominations for their part in technical remote productions on NASCAR, ESPN College Gameday, ROOT baseball, and ESPN NBA Finals. Sullivan’s thriving business sets industry standards and now includes of a fleet of 35 trucks, a team of more than 100 employees, and a presence at virtually every major televised sports and political event in America.